Most asset classes moved lower; the main exceptions were gold stocks, which rose 3.0%, and long term treasury bonds, which gained 2.5%. The largest losses were in crude oil, which dropped 7.8%, and copper, which fell 6.1%. Cryptocurrencies also pulled back, less than some commodities, but more than stocks or bonds.

Cryptos saw a broad decline; Bitcoin dropped 5.8% and Ethereum declined 4.9%. Some of the smaller cryptos fell much more. DASH (not in table) plummeted 12.2%, but to be fair, this gave back only a small part of the previous week's monumental 102% gain.

Gold stocks made the largest gains of any asset, rising 3.0%, but all the other equities in the table fell. The European STOXX index dropped the most, falling 2.2%. In the US, the Dow Jones 30 Industrials declined 1.6% and the broader S&P 500 gave up 1.4%.

Commodities all declined, led by crude oil and copper which fell 7.8% and 6.1% respectively. The precious metals fared the best, as Platinum dropped 0.7% and palladium pulled back 0.8%. Silver closed 1.7% lower. 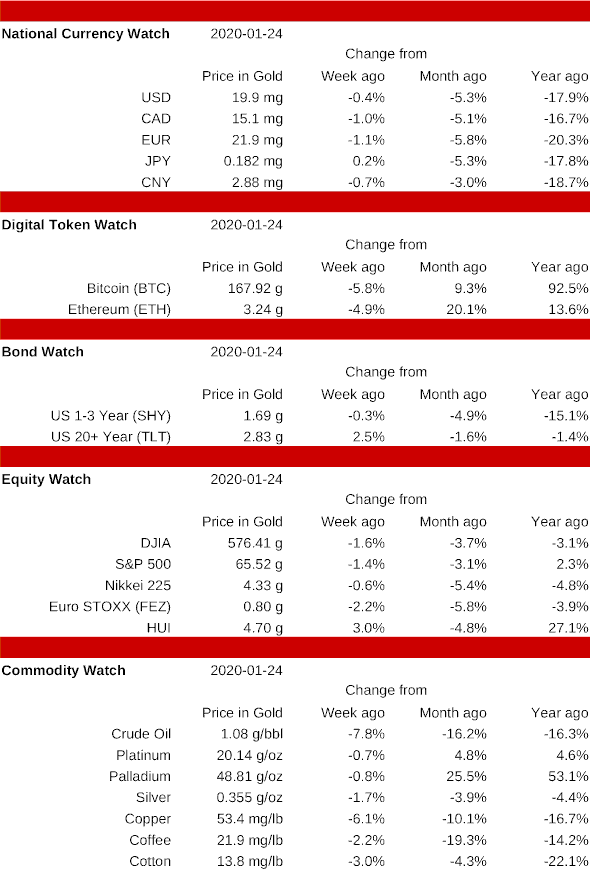