The only serious declines this week were in precious metals and gold stocks. The largest gains were once again in Bitcoin, which rose 11.7% to a new all-time high of 32.7 grams, so that 1 BTC can now buy more than one ounce of gold. Gold stocks again fell more than any other asset-class, dropping 5.1% to close at 4.9 grams. The Dow Jones Industrials were headline news again, as the the Dow broke through the 21,000 mark as measured in US Dollars. More on the Dow and Bitcoin stories below.

The Canadian Dollar was the only currency on the list to fall, dropping 0.1%. As a side note, I track quite a number of currencies not on this list, including CHF, GBP, AUD, SGD, ARS, CLP and NZD. All of these were also higher, except the NZD, which fell 0.4%. The USD rose more than any other currency, gaining 2.2%. Bonds were mixed and favored the shorter maturities: the long term TLT was little changed, falling 0.015%, while the short term SHY gained 1.9%, and USD cash rose 2.2%.

I'd like to take a moment to explain why I always include the US Dollar in my listing of bond prices. The USD is not really cash, although this is how we commonly refer to it. It is a debt instrument issued by the Federal Reserve (Federal Reserve Notes). These notes pay 0% interest (more than you get in some European banks!) and have zero maturity (meaning that you don't have to wait to redeem them at par value – although they are not really redeemable in any meaningful sense at all; instead they are traded amongst their holders and used to settle day to day transactions in barter style). So looking at the three bond prices (TLT, SHY and USD), we have a spread in maturities from 20+ years, to 2-3 years, to 0 years. I find it useful to watch how the various maturities rise and fall in price relative to each other. This week, for example, the shortest maturity (cash) rose the most, while the medium maturity rose somewhat less, and the longest maturity fell slightly. This time preference can be affected by many factors, including expectations of inflation or deflation, changes in interest rates, and the availability and terms of credit from banks and other lenders.

Although the Dow Jones Industrials garnered the most headlines this week by closing at a new high above 21,000 USD, the best performing equities were the European STOXX, which rose 5.4%. Gold stocks had the largest losses of any asset category, falling 5.1%. The Dow stocks rose 3.1% to 532.7 grams, and despite their sky high USD prices, they are in fact 0.9% below their high for the year to date, and 62% below their all time highs set back in August of 1999. The Nikkei 225 rose 0.7%, the smallest rise among the major stock indexes.

So, what about Bitcoin? Unlike the Dow, Bitcoin really has hit a new all-time high this week. And in so doing, it passed the point of parity between one Bitcoin and one ounce of gold. There really isn't anything magic about this number, any more than when Bitcoin's price exceeded that of the USD in 2011, or 1 gram of gold in early 2013, or 10 grams of gold in late 2013 and again in late 2015. There are many pundits out there predicting everything from Bitcoin's imminent collapse to its reaching $5,000 or even $1,000,000. Without referencing the general price level that goes with these predictions, they make little sense to me.

Bitcoin's price may be the same as gold's, but is Bitcoin as Good as Gold? Which one should you buy now, since their values are about equal?

In many ways, Bitcoin is an attempt to create "digital gold", with built-in scarcity that eliminates the ability of anyone to create more without limits. It cannot be "double-spent" or counterfeited. It is not amenable to control by a central bank, and does not need any central authority to issue or keep track of it. You either have it, or you don't. If you want more of it, you have either do work or trade something of value to someone else to get it. But in other ways, it is very different from gold (in fact almost the polar opposite of gold). It has no mass and takes up no space, being purely digital in nature. It can move almost instantly and for very little cost to anywhere in the world, crossing any border or boundary. No bank account, passport, or paperwork is necessary to get it and use it. There are no storage fees or insurance fees to keep it. If you have a smartphone or computer, you are ready to go. There are no limits on transfers, and no way to seize or freeze your funds (other than coercing you into handing them over.)

These advantages over gold have led some to claim Bitcoin will make gold obsolete, but there are still some factors in gold's favor. Gold has a long track record, going back thousands of years, and it is widely recognized all over the world, even in places where there are no smartphones (although those are getting harder to find these days). Gold does not require a working internet infrastructure to support it. It cannot be hacked and does not have the potential to fail due to undiscovered software bugs. It does not have to worry about block sizes, transaction rates, confirmation times, 51% attacks or other technical issues. Its value is well established through a very high volume of trading on multiple exchanges worldwide, and generally changes only gradually, making it an excellent choice for measuring the prices of other things – especially over long periods of time.

Gold and Bitcoin are not investments. Gold is the ultimate long-term store of value, and is useful as a unit of measure for tracking the prices of other things. Both gold and Bitcoin can be used to hold funds outside of the banking system and its maze of counter-party risks. Bitcoin should be the asset of choice when portability is paramount. Bitcoin could also be held as a speculation, but its volatility can work for you or against you, so position sizing is critical for this application. (In other words, don't bet the farm – you could lose it all!)

I would say that gold is for the core savings you feel you cannot afford to lose, and do not want to put to work, and thus at risk. Bitcoin is for funds you can afford to lose, and want to have available to you anywhere in the world on a moment's notice. Bitcoin is also a way to accept payments from all over the world with very low fees and no merchant account hassles, excellent for running an online business. 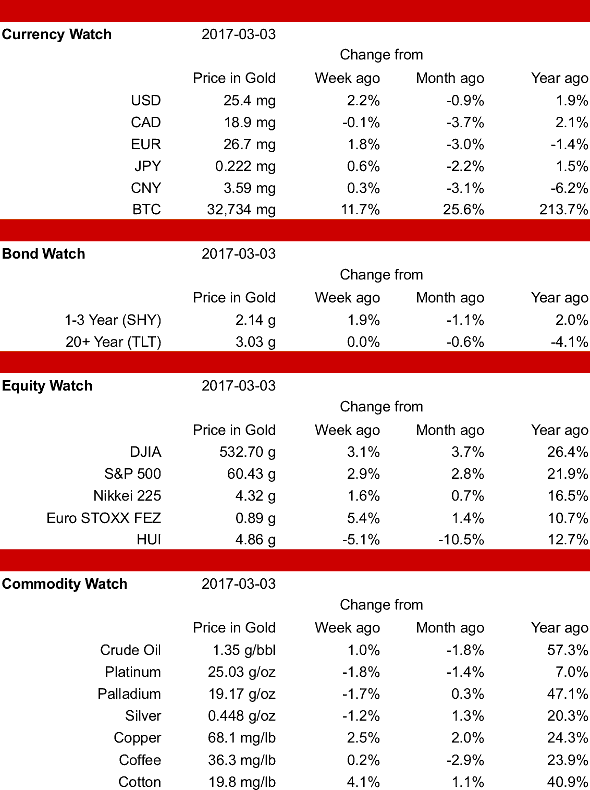