This week, government currencies and bonds were higher, while stocks and commodities were mixed. Long term treasuries, represented by TLT, had some of the largest gains both for the last week and the last month, but it may be time to sell – more on that later in this update. Bitcoin and the HUI gold stocks have been the weakest asset classes for the last week and the last month, with silver and platinum also hit hard. Coffee continues to be one of the strongest performers, over the last week, month and year.

Gold stocks, which were looking promising a few months ago, have been unable to breach the 6 gram level, and since mid-August have collapsed. They closed this week at 4.94g, the lowest level for this year, and just above last year's low of 4.86g, which was the lowest level seen in 14 years.  Silver also continues to decline, hitting a low of 0.436g on Wednesday before recovering to close the week at 0.442g – its lowest levels since 2009. Platinum, although hit hard during the last month, is virtually unchanged from a year ago.

TLT, the 20 year treasury bond fund, is now at the top of its rising channel. Although it certainly could go higher from here (as it did in mid-2013), I would be looking to take some or all of my profits off the table at this point. Aggressive traders might even want to sell TLT calls or scale into a short position if the price continues to rise above the channel line.

These bonds have done very well, doubling in value over the last three years – almost matching the performance of the Dow and S&P 500. But that rise has been a series of ups and downs, zig-zagging along an upward sloping channel. With the economy balanced on a knife-edge between inflation and deflation, the Fed ending it's QE program, and interest rates starting to rise, I think the most likely scenario is a continuation of that pattern: a return to the lower limit of the channel. 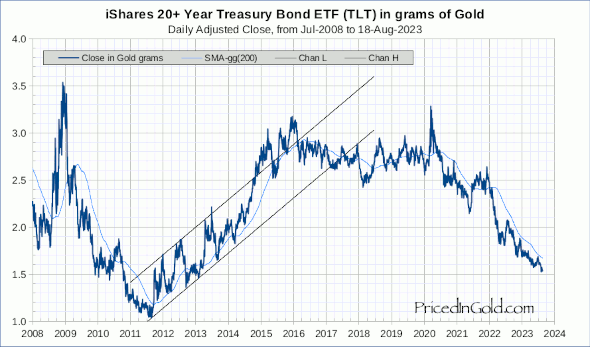 WIth all the uncertainty in the world, from ISIS in the middle east to Ebola in Dallas, from riots in Hong Kong to Russian troops in the Ukraine, the US Dollar has been percieved as the safest haven, and its price (and the prices of US stocks and bonds) has been rising as investors seek a secure home for their capital. In fact, the USD is now about twice as valuable as its half-life curve suggests it should be.

Could it go even higher? Of course it could! Does this mean that the half-life curve has outlived its usefulness – that we are now in a New Era where the USD will continue to rise in value, perhaps to pre-2000 or even pre-1933 prices? I sincerely doubt it. None of the fundamentals have changed… Debt is still sky-high and growing at a harrowing pace, and has to be serviced, requiring an ever expanding quantity of money. Even as some central banks reduce their rates of money creation, others are just beginning to crank up the presses to fight a perceived deflationary threat. All that uncertainty is not going away. And the next crisis, whatever form it may take, will probably shake the foundations of the fiat currency world and refocus attention on real money: gold. 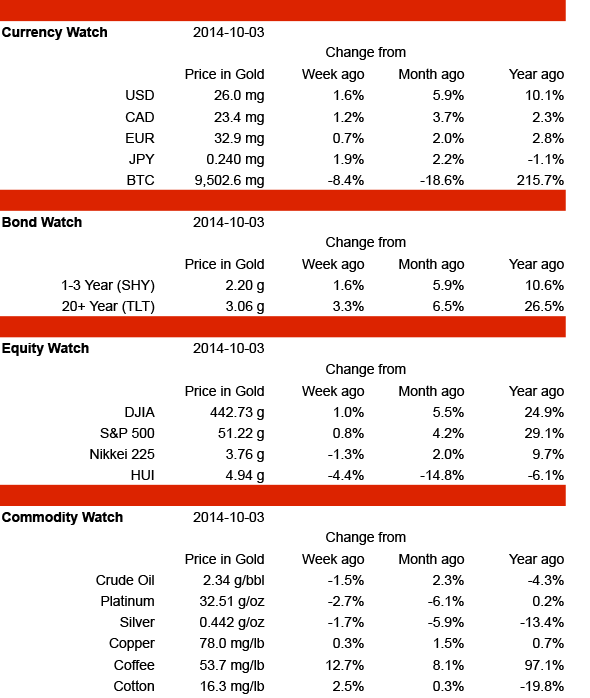