Is the Debt Bomb a Dud?

Many people are rightly concerned that the US Federal debt has been exploding in the last few years. A quick look at the following chart will show why: 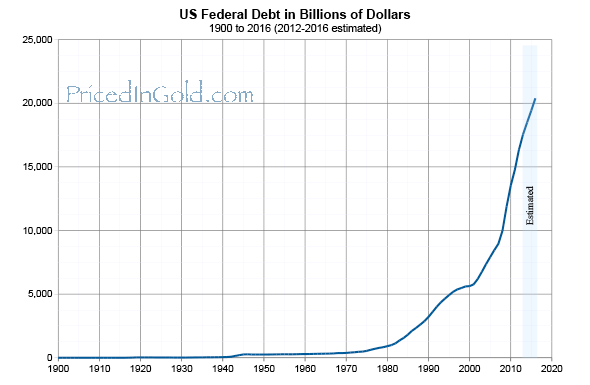 This chart doesn't try to show all the debts of the United States, just the publicly acknowledged debt of the federal government. So it doesn't include state and local debt, and it also omits unfunded liabilities (promises to pay in the future for things like medicare and social security). This is the number that grows each year by the size of that year's deficit.

As you can see, it stayed pretty small until the 1940s, when World War II moved spending up to a new level. Even then, it didn't rise dramatically until the 1970s, when the US dropped the last vestiges of the gold standard, and began running the printing presses in earnest to fund social programs at home, and the Cold War abroad.

Despite the collapse of the Soviet Union, social and military spending continued to grow in the 1980s and 1990s, paid for with borrowed money. After the market crash in 2001, new programs to "stimulate" the economy were implemented, shooting debt levels to heights never imagined before. And after the 2008 crash, efforts to "stimulate" were redoubled, piling on debt at an even faster rate.

The last few years of this chart are estimates based on the government's own forecasts of future deficits. If history is any guide, these will probably turn out to be on the low side.

Of course these debts are financed primarily by the Federal Reserve buying the government's bonds with money that it creates out of thin air. This process has many pernicious effects, distorting interest rates, inflating the money supply, distorting perceptions of risk, and causing businesses and consumers to misallocate their resources.

Although we are focused here on the United States, this same process is going on, with various twists, in all the major economies, including Japan, Europe, the UK and China. So these distortions are worldwide in scope, and undermine the value of all of the government issued "fiat" currencies.

I am old enough to remember 25 cent gasoline and shopping in a dime store. Now we paying $4.00 for gas, while our kids shop in the Dollar Store. You can see this decline of value by charting the amount of gold it takes to buy one dollar. Originally worth about 1500 mg (1/20 of an ounce), it has now fallen to about 20 mg – one seventy-fifth of its value in 1900. 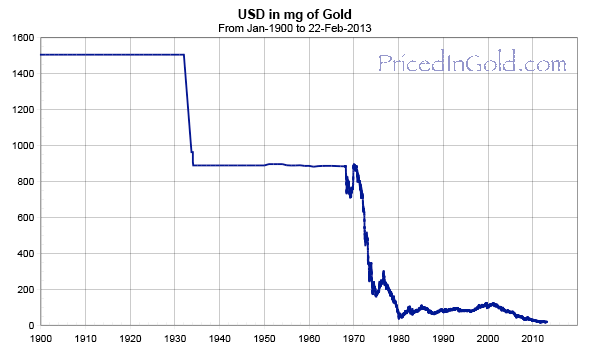 Zooming in on the period from 2001 to the present, which also happens to be the period of fastest growth in government debt, we find that the dollar has been declining in a logarithmic fashion, just the way radioactive elements decay. The time it takes for a substance to lose half of it's radioactivity is called its "half-life", and varies depending on the particular material, with some taking thousands of years to lose half their power, and others decaying in tiny fractions of a second.

If you listen to this decay process on a geiger counter, you hear a random clicking, sometimes with bursts of many clicks close together, other times very few clicks, as nuclei disintegrate and give off radiation. But plotted over time, the rate of decay sticks very close to a smooth curve. 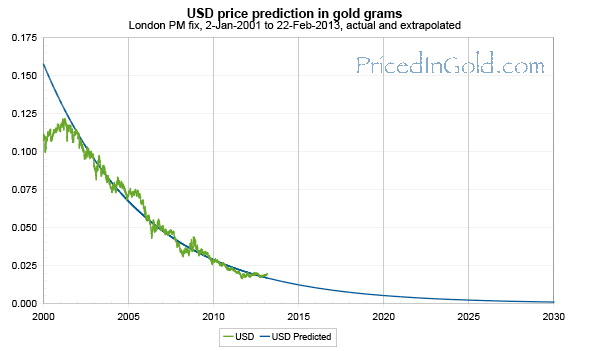 If we project this pattern into the future, we see that its value never reaches zero, it simply keeps cutting in half over and over. First to half, then to a quarter, then to an eighth, and so on.

This is the flip-side of the "miracle" of compounding, where your money doubles after some period, over and over again. Compounding is wonderful for the lender, as long as he actually gets repaid in money that has as much buying power as the money he lent in the first place.

But there's the rub – if it takes 7 years to double your investment by compounding, but the money is halving it's value every four years, as an investor you have a problem!

On the other hand, if you are the borrower, everything is turned upside down. Generating enough cash-flow to pay compound returns to your lenders isn't easy. Borrowing even more to keep things afloat and cover your interest payments just digs you in deeper. But being able to pay the loans back with depreciated dollars is a great help to the borrower.

Returning to the subject of the US Federal debt, the government is faced with the task of paying back an exponentially compounding pile of debt, but it can do so with dollars that are rapidly decaying in value.  So, which side is winning the "tug of war"?

By simply repricing the debt in gold, we can see the answer:

Clearly, for more than a decade, the dollars in which the debt is denominated have been losing value much faster than the debt itself is growing. The massive and growing deficits and endless bailouts, stimulus programs, and rounds of quantitative easing are causing the "bid" for dollars to be lowered faster than those programs add new debt. In fact, currency debasement is crushing the debt explosion, causing it to halve every 5-6 years.

Whether this is due to careful financial and monetary engineering, or just dumb luck, I can't say. But let's follow down the consequences if this pattern continues.

The current federal debt is about 295 kt of gold. The government claims to have 8.13 kt in its reserves. At current rates, those gold reserves will be sufficient to fully collateralize the debt in 5.2 half-lives, or 25 to 30 years. Even that may not be necessary; a return to the debt levels of 1900 (31 kt) will take only 15 to 20 years.

So the good news is that there is a realistic hope of putting government finances back onto a solid footing in the not too distant future, potentially allowing a transition to a redeemable currency without total default on existing obligations. (Of course paying back debts with a debased currency is a sneaky kind of default, but a legal one that people don't seem to complain too much about, for some reason.)

The bad news is what the world will look like for those who keep their books in dollars: in 20 years, dollar prices will be roughly 32 times what they are today. So an ounce of gold might set you back $51,000, gasoline could cost about $128 per gallon, and mailing a first class letter will probably require a $15 stamp (if the US Postal Service is still in existence). Ivy league college tuition will be a million dollars or more per year. It is very unlikely that wages will keep pace, meaning the standard of living for most people will be dramatically lower than it is today.

Owning gold and silver won't make you rich in this scenario. A year of college will probably still require about kilogram of gold, and a silver quarter should be enough to buy a gallon of gas (even with some stiff carbon taxes). But it will preserve the purchasing power of your savings, and leave you in a position to take advantage of the price distortions created by the latest round of lame government regulations. And that might make you rich!

This article was first published in the March 2013 issue of the Journal of the Gold Standard Institute.

Comments on Is the Debt Bomb a Dud?

I am a bit surprised no one else has responded to this article so I am doing so even though I'm two years behind the times.

I enjoyed Charles' article, as usual, and it brought home that my suspicion that the debt looks quite different when priced or valued in gold. Though the data in the final chart could be viewed as good news, I can imagine that politicians do not want to talk about this because it shows what "they" have done to the dollar and speaks to debt reduction by debasement as Charles noted above. Nonetheless, this article somewhat relieves me as it shows federal debt may not be as egregious as it appears expressed in dollars.

I suspect (hope?) this may be an interesting topic for a future Priced in Gold newsletter.

Please keep up your excellent work, Charles. The world needs an accurate measuring stick and in monetary terms, nothing is better than gold.