The Dow Jones Industrial Average, the S&P 500, the Russell 2000 and other major indices have recently featured in headlines claiming that they are now at record highs. While this is certainly true in dollar terms, how much is due to a falling USD, and how much is due to rising company values?

To determine this, you have to step outside the dollar framework and look at prices in gold.

All prices are an expression of preference. If you value 10 gallons of gas for your car more highly than the $35 in your pocket, you will buy the gas for $3.50/gal. On the other hand, if you have other things to do with that $35, or if you are concerned that you may need that cash as "emergency money" in the future, you will pass on filling up the tank and save the money. Perhaps a lower gas price will come along and change your mind, or perhaps you will become more desperate for gas in the future, but for now, you see the $3.50 asking price as too high.

The same applies to gold pricing. Which would you rather have in your portfolio, a few shares of each of the 30 Dow Jones Industrial stocks, or, let's say, 20 ounces of gold? Would you trade your stock portfolio for 5 ounces? Could you find a buyer who would give you 40 ounces for it?

The price at which willing sellers and willing buyers both agree to the trade is the "clearing price" of a good or service. This price evolves all the time, as the needs and desires of buyers and sellers change.

This chart of the Dow Jones Industrials, courtesy of StockCharts.com, shows the concensus of traders in the market each day over the last 15 years: 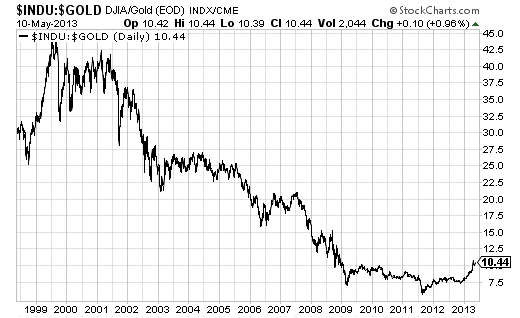 Still, in the last half of 2011, they were only offering about 5.6 ounces… so in the last 18 months, the Dow Industrials have almost doubled their gold value – a very smart investment. And most of that gain has occured in the last 6 months: 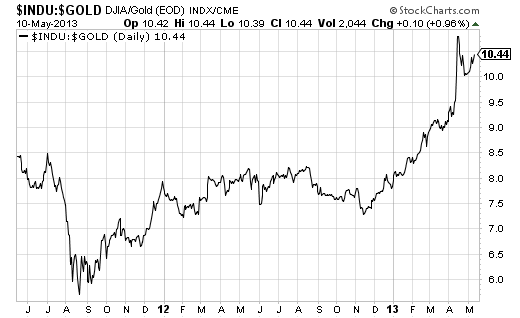 No one knows the future. It is possible that the lows of 2011 will turn out to be the lows for this cycle, and that the overall movement from this point will be higher; perhaps in the next 13 to 20 years, the Dow will once again see 44.6 ounces, and set true new highs above that price. But it is also possible that the 5.5 level, or even the 1 ounce level, will be revisited before the "bottom is in".

If you were clever enough to get into stocks in late 2011 or in 2012, you are sitting on some nice gains. If you buy stocks today, you have momentum on your side, and could well see further gains. But keep in mind that we live in perilous times, and if growth or earnings disappoint, or if the central banks begin to hike rates, those gains could disappear in a flash. Keep position sizes moderate, keep your long term savings in gold, and pay attention to your trailing stops (priced in gold). That way you can let your profits run, and exit with most of your gains intact.