Last week saw yet another reversal from the week before; once again, the only thing in common was the continuing decline in silver and copper, now in its 3rd week.

Currencies gained back some of what they lost the week before, lead by the CAD, which rose 1.8%. Bonds were higher, the SHY up 1% (in line with the USD) and the long term TLT up 0.4%, only recovering a tiny portion of the prior week's 3.8% loss.

Equities were all higher except for the gold stocks represented by the HUI, which fell by 0.1%.  The Dow and S&P 500 rose1.2% and 1.4% respectively, more than offsetting the prior week's losses.

Platinum, which I don't usually include in these weekly summaries, made a new 12 year low on Friday. The "other white metal" is now 13.23% cheaper than gold at 27 grams per ounce.  I continue to expect that platinum will eventually trade for more than gold, as it has for most of it's history, but fears of recession in the US and Europe, along with slowing growth in China, appear to be pushing industrial metals like silver, copper and platinum lower in the short term. I see this as a buying opportunity. 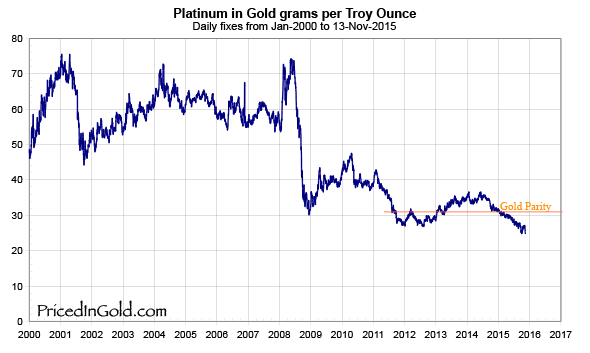