Cryptocurrencies and bonds rose again, stocks were lower, and other asset classes were mixed. Bitcoin added 8.6% for the week's largest gain. The biggest losses were in crude oil, which fell 6.7%.

National currencies were quiet, with the Japanese Yen rising 0.4% and the Chinese Yuan falling 0.2%. The US Dollar was off 0.1%. Short term bonds were unchanged, but long term TLT gained 1.3%.

Cryptocurrencies were higher, led by Bitcoin, which rose 8.6% to close at 193.7 grams after hitting a high of 199.1 grams on Sunday the 19th. Ethereum also gained early in the week, but settled back to finish up 2.2%. Some other coins did even better than Bitcoin; for instance, DASH end the week up 13.3%.

Crude oil was the weakest commodity, and was the weakest asset overall, falling 6.7%. The strongest commodities were coffee and cotton, which rose 4.7% and 3.5% respectively. Platinum was down 2.9% to 19.4 grams/oz. Silver gained 0.4%. 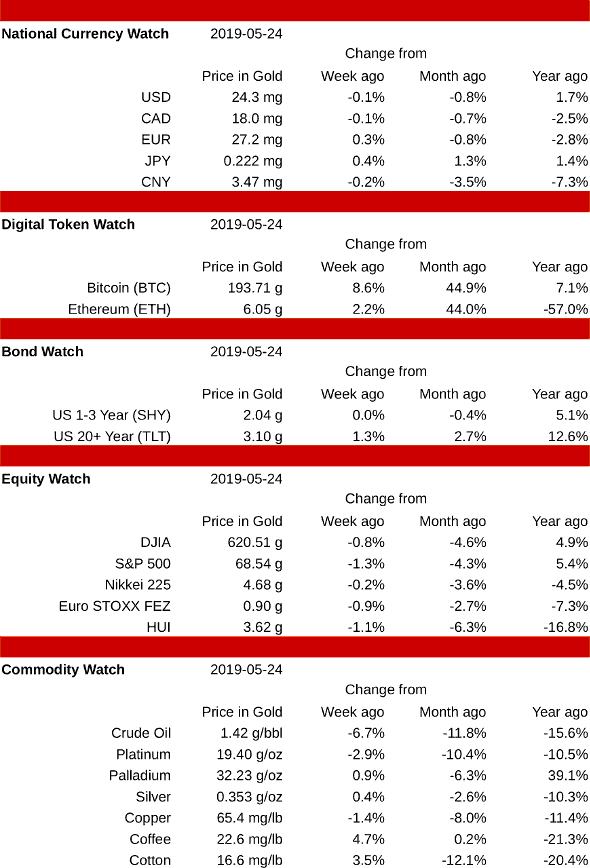