Commodities and equities were mixed, but all other asset categories were higher. The largest gains were in Ethereum, which soared 5.2%, but copper also rose strongly, adding 4.7%. Palladium plunged 9.5% to close at 33.4 grams/oz, just above parity with gold, the largest loss for the week.

The Canadian Dollar was the strongest national currency, gaining 1.6%. The Japanese Yen lagged the others, adding just 0.4%. Though not in the table below, the British Pound under-performed even the Yen, falling 0.2%, presumably on BREXIT concerns. The USD and CNY each rose 1.2%. Bonds did better than cash, as the short term SHY gained 1.3% and the long term TLT added 2.5%.

Ethereum sagged early in the week, then rallied strongly on Wednesday and again on Friday to finish the week up 5.2%. Bitcoin followed a similar pattern, ending up 3.1%. Some smaller cryptos did even better than ETH. For instance, DASH ended the week up 8.4%.

Precious metals were weak, with palladium suffering a massive 9.5% drop and silver falling 1.1%. Platinum managed an anemic 0.9% gain. The real winners were copper, which rose 4.7%, and crude oil, which added 3.1%. Cotton also did well, rising 2.6%. 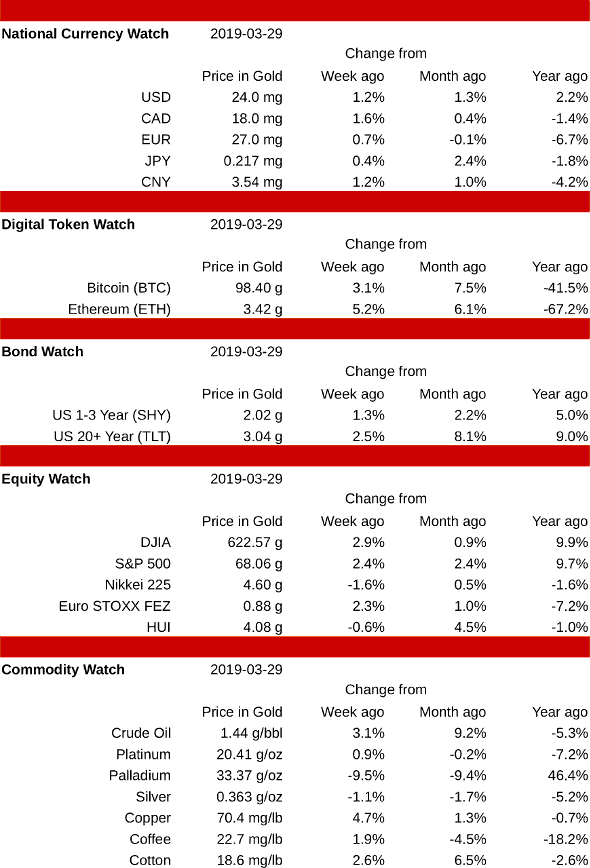