After last week's monster surge higher, most asset classes took a breather and pulled back a bit this week. The exceptions were bitcoin, which suffered a stunning drop, gold stocks, which gave up almost all of last week's gains, and crude oil, which continued to power higher this week.

After losing 5.5% last week, Bitcoin dropped a further 27.8% to close at 1.82 g. Trading volume picked up significantly, averaging about 100 kg per day. This is a big price drop, no doubt, but keep in mind that BTC could fall all the way to 0.5 g without violating its long term exponential uptrend. 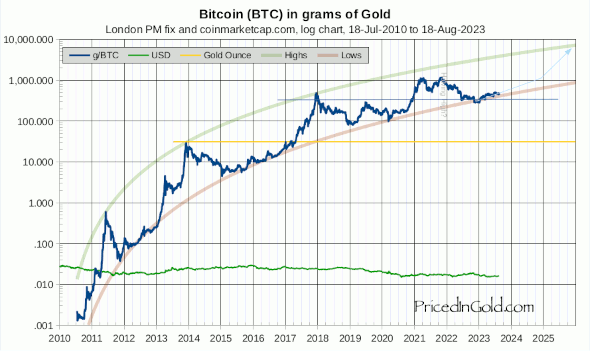 The government currencies were all weaker, led by the JPY which fell 3.9%. The USD was least weak, falling 1.7% to 25.6 mg, now 62.3% above its half-life curve. I continue to see this price action as a blow-off top, and urge you to take advantage of it if possible! See last week's market update for suggestions on how to invest now.

Bonds were lower, with the short term SHY losing 1.7%, mirroring the USD, while the long term TLT fell 5.2% to close at 2.88 g, giving up about half of last week's gains.

Commodities were mixed, led by crude oil, once again the strongest asset class of the week, which gained 5.1% to close at 2.65 g/barrel. Silver was also higher, gaining 0.7% to 0.496 g/oz. The others were all lower, led by copper which lost 1.4% and platinum, which fell 1%.