The big news this week centered around the coronavirus outbreak, as total cases approached 12,000 (mostly in China) and the US declared a public health emergency and restricted travel to and from China. Big beneficiaries of the scare were cryptocurrencies and long term bonds. National currencies, stocks, and commodities all moved lower. The largest gains were in Bitcoin and Ethereum, which rose 9.3% and 9.1% respectively. Commodities took the biggest hits, as coffee dropped 8.0% and palladium fell 7.7%.

The Canadian Dollar was the hardest hit of the national currencies, falling 1.9%. The Japanese Yen fared best, giving up just 0.3%. The US Dollar and Chinese Yuan each fell 1.3%; but since the Shanghai Gold Exchange has been closed this week, the figure for the CNY is just an estimate. Bonds did better than USD cash, as the short term SHY fell 1.0% and the long term TLT rose 1.4%.

Cryptocurrencies worked their way higher, peaking on Thursday the 30th. Bitcoin hit 187.4 grams before closing at 183.6 grams, up 9.3% for the week. Ethereum followed a similar pattern, ending up 9.1%. Some smaller cryptos did even better; for instance, DASH (not in table) rose 14.0%.

Stock indexes all declined, led lower by the European STOXX, which fell 4.3%. Gold stocks dropped the least, closing down 2.1%. The Dow Industrials were off 3.8%.

As mentioned earlier, commodities saw the largest declines of the week. Coffee fell 8.0%, palladium was down 7.7%, and copper slid 7.4%. Silver outperformed other commodities, reasserting its monetary nature and giving up just 1.0%. 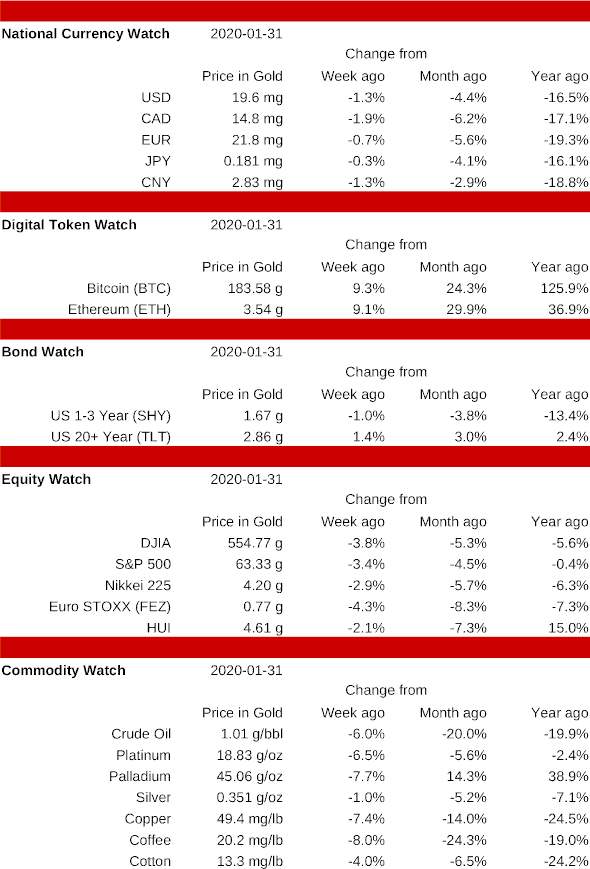 Filed under monetary universe by editor